Scammers... How Low Can They Go? 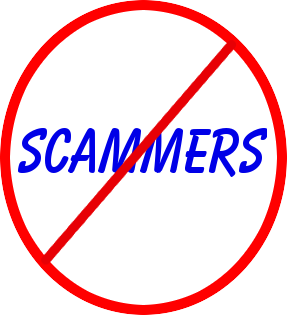 Preying on the kind nature of people.
Really?
How does one even justify that this is ok to do?
I just don't get it.

Before I get to the one that prompted me to write this post, I will share a previous experience.

A few years ago, while at the grocery store, a young man approached my husband asking for a couple of dollars because he was out of gas and had no cash on him. Okay. That is believable enough.
Well, a couple days later, there was the same young man in the same parking lot, pulling the same scam. A week or so later, he was working the crowd in another nearby parking lot. Over a year later, across town, he was still approaching strangers to "help him out". He had his same beat up old car and was using his same lines. He even had a couple of friends with him getting in on the action. Poor struggling students...

This is nothing compared to what a pair of scammers were pulling a week or so ago.

The couple was approaching people outside the store asking for donations to help bury their baby. They claimed that he was killed in a hit and run accident a week earlier and they didn't have enough money to cover funeral costs.


Anyone with a heartbeat would be compelled to help this couple in their hour of need, right? I mean, what kind of person are you to not help out?

When they approached my husband, of course he wanted to help, but having seen scams and such before, he inquired further. He asked them if the police department could steer them toward a charity or other group that would help with their expenses so that they didn't have to spend their time and effort out in front of the store while still trying to deal with their grief. He asked them where the accident occurred (way across town). He talked with them. He showed compassion. Really, in a case like this, you hope that it isn't true. Yet, how could someone make something up like that and still sleep at night?

Instead of giving the couple some money, my husband offered to help in a different way. He told them that he would call the police department and see if they could recommend somewhere that they could go for help.  He asked me to look it up on the computer, in the news, to find more details so that we could do something to help these poor bereaved parents out.

No report of the accident.

There was news of a dog being hit by a car a few miles from where the couple claimed that the accident happened. Nothing else.

It was a scam.

So what does this mean? We shouldn't "do the right thing" or "do the compassionate thing" and help others out when needed? No. It doesn't mean that. It simply means that there are those out there who will try to take advantage of others, and we need to be aware of this.
These scammers make it harder for people who are truly in need of a little help- even if it is just a couple of dollars to put gas in their car so they can make it home.

It's sad that we even have to do that.