Make Your Own Flashcards and Game

I love flashcards!
I think they are great learning tools.
When we go to book stores, educational stores, even dollar stores, I like to check out their flashcard selection.

Some of the sets cost up to $6 or $8, but I bought most of them for between $1 and $3.
I love the cheap dollar store ones. I include them in goodie bags as party favors, or buy them as stocking stuffers. Those are nice as gifts, but when I want to be really frugal, I make my own.

I like to make my own for a few different reasons.

I like to stock up on flashcard making supplies during "back to school" time. The stores have great sales. I usually go to Walmart or Target and buy a bunch of packs of blank index cards for around twenty-five cents each. I get packs of crayons for fifteen cents each, markers for a dollar, etc. (I also make sure I pick up a ton of folders and notebooks for fifteen cents each, too! I try to buy enough to last the whole year.)
Alphabet Flashcards
When I make alphabet flash cards, I like to include both the upper and lower-case letters on the same card when my kids are first learning letter recognition and sounds. I used to do just one on each card, but I realized that when I combined them they seem to learn both faster and easier. I like to make the consonants one color, and the vowels another color. I think it makes the vowels stand out and my kids learn their significance easier. (That's what I hope, at least!)
Once they become familiar with the letters, I make two more sets, splitting the letters up this time. One set is upper case, and the other is lower case. This is great for matching games, and such. Alphabet "Go Fish" is really fun, so is Memory Match.
Shapes and Colors
I like to combine shapes and colors. I do this for two reasons. For one, I think it is a great teaching method. The other reason... um... well... it means I don't have to make another set.
If i want to focus on color learning, I simply ask my child to name the colors. If I want to focus on shapes, they name the shape. If they are already becoming familiar with both, they can name both.

Numbers and Counting
When I make number flashcards, I like to do something similar to the colors and shapes. I write the number, then I make as many objects to count. If you look in the picture above, you'll see that I made hearts on that set. Later, I can make a set of numbers only and a set of hearts only. The kids can play matching games with them.
Flashcard Game
Another fun thing to do with flashcards, is to make a game! You can make any type of game board you like. I made a simple one with crayons, a black marker and a manila folder. 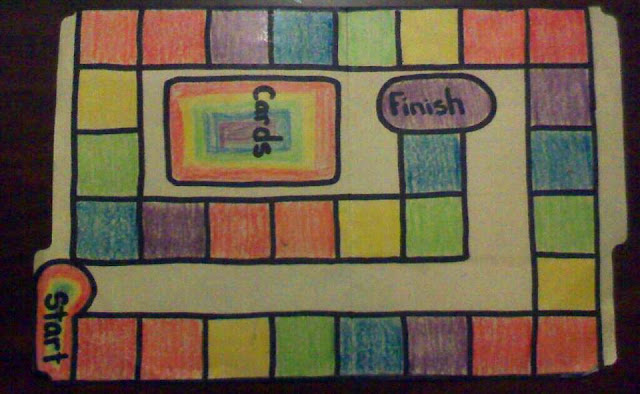 You can make your own game markers, or you can use little objects such as coins, little toy dinosaurs, toy army guys, or whatever you like.
You can decorate your game board however you like, too. I made this simple, colorful board. It doubled as a color match game (similar to Candyland) when my daughter was learning colors.
Obviously, the goal of the flashcard game is to get to the finish. Players can do this by drawing a flashcard and "getting it right". They can move forward one space for every correct answer.
You can make up your own goals and rules to suit the set of cards you use. For the Shapes and Colors cards, I let the kids move forward 2 spaces if they get both the shape and color correct, and once if they only get one correct. If they get both incorrect, they don't move at all. See where I'm going with this?

The possibilities are endless when making you own flashcards and game. Be creative.
Get the kids involved. They can have fun helping you or they can make their own. If you ever lose a piece, or lose a card, it's easy to make another one!