"Would You Like Your Bread From The Floor, Sir?"

This past weekend, we took our younger four kids out to the Fountains at Roseville. It's a neat little shopping center with a big fountain, train rides, a playground, and some quaint little stores and restaurants.

After playing in the playground and tossing pennies for wishes in the fountain, my 7 year old wanted to go to Boudin Bakery Cafe for some sourdough bread. She LOVES sourdough bread! We all do. In fact, we have our oldest son go over to Boudin's at least a couple of times a week to buy fresh sourdough loaves from them. So, we headed over there to buy a baguette.
I was completely FLOORED (no pun intended... ok, maybe a little intended...) by what happened next.

There was one baguette left in the bread container on the fixture next to where the customer line is formed. My husband asked the girl behind the counter if that was the last one, or if they had some fresher bread in the back, as Boudin Bakery is usually known for their fresh bread. The girl glances over... and down. She says that she has one more baguette in the back, and she can get that one for him, as she had just finished bagging it up.

Now, I didn't notice her glance down, but my husband sure did. So, he looked through the glass display window and this is what he saw: 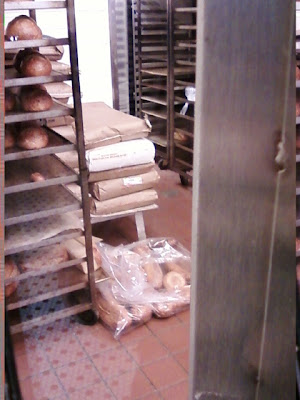 She was going to sell us some bread that she had put in a bag on the floor.
ON THE FLOOR!
When my husband asked her if that's the bread she was going to sell us, she just responded by saying, rather aloofly, "Well, it's in a bag."
OK. It is in a bag.
But the bag could have a tiny rip or hole in it that she may have overlooked. And dirt and bacteria from the floor could get through that hole. It is unsanitary and I am sure there has to be some sort of health code against it.
Oh, and, it's on the FLOOR!

The girl didn't seem to understand why it was not a good idea to have bread on the floor. Her manager walks over to join in the conversation, and she sees no problem with it either. She tells us that they are not selling that bread, so it is ok for it to be on the floor.

Um... excuse me... the other girl was just trying to sell it to us! When we told the manager this, she just brushed it off, as if it didn't even happen. She reiterated that they do not sell this floor bread... they donate it.
Seriously??? This makes it ok?
I asked her, "So, if you donate it, then aren't people still eating it? How is that ok?"

By this time, she wasn't making any sense at all.
She tells me that most of it probably doesn't even get eaten anyway, they don't sell it, and it is donated, so it's ok for it to be on the floor.
Her main point of her argument was that they don't actually sell that floor bread (even though they were just about to sell it to us) so, it doesn't get eaten. Instead, they donate it.

Is it just me, or is something seriously wrong here? Are the people who go to the food closet or soup kitchen that receive this bread lesser humans than she, thus making it ok to give them floor bread??? Is this Boudin Bakery's policy?
She seems to think so.
Needless to say, this upset me. A LOT.
Enough for me to dedicate a post to the incident.
Enough for me to contact the Boudin Bakery corporate office.
Enough for me to get the word out any way that I can.
Do people really have that attitude? That is just wrong!

Boudin Bakery, if you read this post, I would love to hear your thoughts on this.

We ended up going over to Whole Foods and buying some yummy sourdough there, along with some smoked mozzarella cheese. Delicious!
It is safe to say that we will NOT be buying our sourdough from Boudin Bakery again.


*All photos are uploaded from my cell phone camera, and they are unedited.