Mexican Hot Chocolate is one of my favorite drinks. There is just something about the blend of the spices together with the chocolate that I love.
...Mmmmm... Cinnamon and chocolate... *sigh*
Sorry! Where was I?
...Oh yeah...
The other day, I was about to make something chocolaty. I had some cocoa powder and cornstarch on hand, and I thought chocolate pudding would be yummy.
I really like a recipe from Allrecipes.com called  Hasty Chocolate Pudding. It's "hasty" because it's made in the microwave. I mean, come on... microwave pudding... how much easier can you get?
Then it hit me... why not make  Mexican Chocolate Pudding? Something that has the flavors of Mexican Hot Chocolate, but the creamy texture of pudding? Yes please!
So, I set out to make it happen... in the microwave! 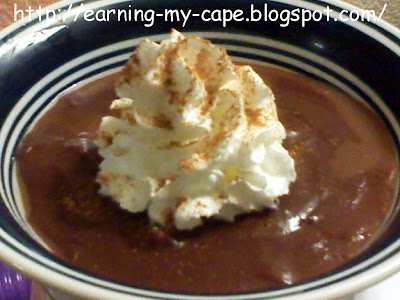 What You Need:
1/2 cup sugar
1/3 cup unsweetened cocoa powder
1 TB cornstarch
a dash of salt
1/2 tsp ground cinnamon
1/2 tsp pumpkin pie spice ( honestly, I think that 1/8 or so tsp each of allspice and nutmeg would have been good, but I didn't have those on hand, so I just used the mixed spice.)
2 cups milk
2 tsp vanilla
a dab of butter (I used almost a TB)
whipped cream (optional)
Cinnamon for sprinkling (optional) 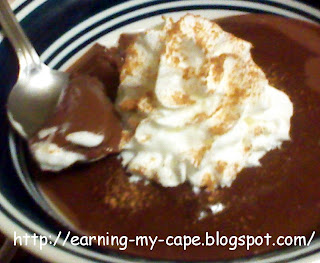