I've seen some cute little crochete Tic-Tac-Toe games online, and thought it would be fun to make one for my 5 year old, for her birthday.
That thought kind of ... evolved. 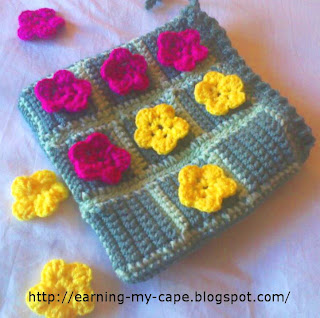 Would you like a peek into my thought process? If so, keep reading. 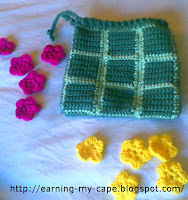 Once again, I was without a pattern, so I just "winged it".
I had two shades of green yarn, so I decided to use that as the base. Then I got to thinking... Making the Xs and Os would be a little time consuming to figure out on my own, and I didn't want to look up a pattern. Since the base was green, and I knew how to make little flowers... Yeah! That could work! I decided to make the green part the "grass" and the markers would be flowers. 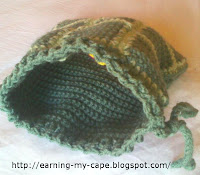 As I was crocheting the base, it occurred to me that my daughter is really good at losing the pieces to games and such. I figured I could make the game fold up or something, to secure the flowers. Hmmm... That wasn't doing it for me. Then it hit me. Just make the game into a bag. At first it was going to be a simple tote bag, but I wanted it to close tightly so the little flowers wouldn't slip out when a certain cute little girl would inevitably swing the game around. A drawstring would do the trick! 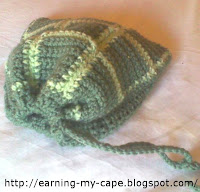 I finished it up, and I was very pleased with the results. My daughter opened it on her Birthday, and she LOVES it!
Yay! 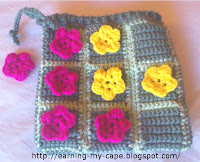 I did sort of write out a pattern (more like notes on what I did), but it's a little hard to follow. If anyone would like me to type it out, I will. Just leave a comment, and I'll do the best I can.

Here is a sneak peek of the blanket that I finished in 5 days, for my daughter's birthday. I will post a couple more pics and the pattern (hopefully) later this week. (My whole family is battling a really nasty cold, so I plan on taking it easy.) 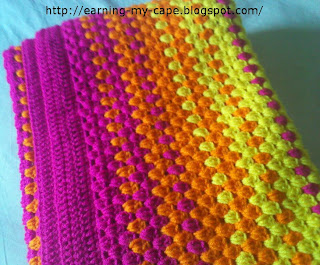 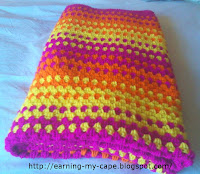