Sometimes I Hate It When I'm Right!!!

Don't get me wrong... I do LOVE to be right most of the time. I mean, come on... who doesn't? It's just that there are a few times now and then that I really, really wish I wasn't right.
Like the other day, for instance. I went against my better judgement and allowed my 5 year old to make a peanut butter and jelly sandwich... at the coffee table... while my (almost) 18 month old was running around playing. Now there are sooo many things that can go bad in this situation, and I knew it was not a good idea. Did that stop me form allowing it? No. Did the fact that I knew it would end badly stop the misfortune that was bound to happen? No.
I guess the sight of the almost full jar of yummy blackberry jam was just too much for a toddler to resist... 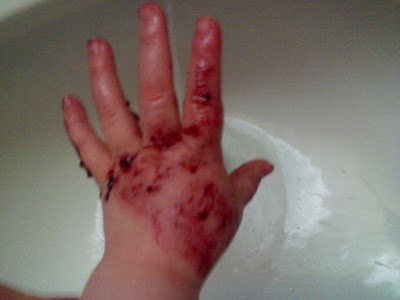 Yup. She stuck her whole hand in the jam!!! She proceeded to lick it off of her hand while somehow simultaneously getting it all over her face, belly, hair, legs, MY arm, and the phone that I was using to take a picture (OK, I probably deserved that one). I started out holding her over the sink... I ended up just giving her a bath. It was that bad.

You'd think I would learn my lesson from that, right? Wrong. The very next day, I was by the table. There was a container of pancake syrup sitting there. I told myself that my toddler can reach the table now, and I should move the syrup back farther. I decided I would do that right after I finished whatever it was that was so much more important at the time than moving sticky syrup out of her reach. Yeah... whatever it was... NOT more important. Sure enough, she got to it. One more trip to the bathtub.

Now for the big reason that I hate when I'm right.

Yesterday, my 5 year old took a nap. Normally, one would think nothing of a 5 year old taking a nap. BUT, she stopped napping when she was 2.
She grabbed her pillow and her blanket and went to the couch. She was asleep within five minutes. I said to my oldest daughter, " Oh no! She's asleep! I HOPE she isn't sick!" My oldest daughter took a more optimistic look at it. She reminded me that her sister had stayed up late the night before and she got up earlier in the morning than she normally does. She was probably just tired. Wanting so much for that to be true, I agreed and went on with what I was doing.
Well, she woke up right before dinner and seemed fine. She ate part of her dinner, then  plopped herself back onto the couch. I told her to go back and finish eating. She took a couple more bites, then back to the couch. As I was clearing some dishes, I hear a commotion! My poor baby was sick! She tried her hardest to make it into the bathroom in time, but didn't quite get there fast enough. Poor girl got sick all over the floor. Looks like I was right, after all.
After I got her in the tub and cleaned up the bathroom, I went and scrubbed the carpet. I hate carpet... I really, really hate carpet... (but that's another post). Once I finished scrubbing, I got her settled in bed with a bucket next to her.

Today, my toddler took an hour and a half long nap... she hasn't been napping much for the past month. When she does nap, it is usually later in the evening and only about 30-45 minutes. I am worried. Please, please, let me be WRONG!!!!