A Lesson in Flexibility

I've always known that it is important to be able to be flexible with things.
Sometimes things just happen and we have to adapt. This is one of the reasons that we don't keep to strict daily schedules for things.

Flexibility also comes in handy for chronic procrastinators.
This is a lesson that I have learned many times.
Like the other day.
The very day before Halloween, to be exact.
The day evening (procrastinator, remember?) that I went to Walmart to buy a pumpkin for the kids to carve (more on that, later), pair of yellow sweat pants and a yellow sweatshirt for my 2 year old's "Pikachu-chu" costume, and a piece of brown felt (to make the 2 stripes on the back) to complete it. I had already crocheted the hat/ears and tail. Easy, right?
WRONG!
Walmart did not have anything yellow.
Nothing.
I looked in the toddler department. I looked in the girl's and boy's departments too. Nothing. Not a plain yellow shirt of any kind. Not a pair of yellow pants to be seen anywhere. I even looked for tights! Nope.

I had to be flexible.
I had to adapt.
I finally settled on buying a yard and a half  of bright yellow fabric and 3 inches of brown fabric. Yes. That's right. 3 inches. I looked at the little felt squares, and they were completely out of brown. I refused to but a whole yard, or even half of a yard, so three inches, it was. I bought a little package of elastic, and I knew I had some Stitch Witchery at home.
Can you guess what I spent most of Halloween day doing?
Now... about that pumpkin...

Our initial plan was to go to an awesome pumpkin patch the weekend before Halloween. We were going to buy a small pumpkin for each of the kids to carve.
Unfortunately, the "germies" decided to stage an invasion, and we were all sick. The pumpkin patch had to be scratched in favor of getting well so that the kids could Trick or Treat on Halloween.
Being flexible, we decided that we would just buy one larger pumpkin at Walmart, when we went for last minute costume supplies. The kids could each have a turn at scooping out the pumpkin guts and each have a say on how to carve it.
Walmart was out of pumpkins.
Seriously!
Just a couple of days earlier, they had two HUGE boxes of pumpkins.
The night before Halloween... not one single pumpkin!
We got lucky when we stopped at a local grocery store on the way home. They had quite a few left and I grabbed a nice-sized one. Whew!
That made the younger kids happy, and they looked forward to me helping them carve it the next day.
... only...
I needed to make the Pikachu costume. It took longer than I thought it would.
Luckily, their oldest brother was there to help!
As much as he hates pumpkin guts, he helped them carve and gut it.
We had a fun idea for the pumpkin design.
Each of them would get one part (an eye, the nose, or the mouth) to design however they wanted.
Each of them drew their part on the pumpkin, and their big brother carved it out for them.
I LOVE how it turned out!

While I was taking the picture, my 2 year old thought it needed goggles. 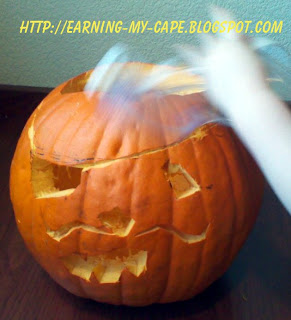 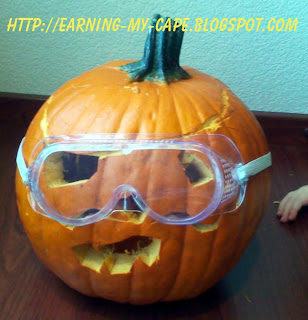 While out Halloween didn't go according to plan, we ended up getting all costumes, a nice pumpkin, and a lot of fun!
We took the kids to a local church (outdoor) festival where they went "trunk or treating". They played a lot of games, and they each got a TON of candy!
Right as we were leaving, it started raining. Perfect timing!

Click here to see which super parties I link up to!